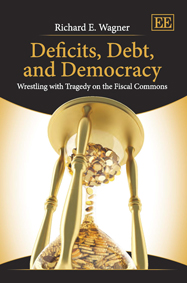 Wrestling with Tragedy on the Fiscal Commons

This timely book reveals that the budget deficits and accumulating debts that plague modern democracies reflect a clash between two rationalities of governance: one of private property and one of common property. The clashing of these rationalities at various places in society creates forms of societal tectonics that play out through budgeting. The book demonstrates that while this clash is an inherent feature of democratic political economy, it can nonetheless be limited through embracing once again a constitution of liberty.

Modern democracies are dominated by budget deficits and the accumulation of debt. Public discussion and controversy often centers on deficits and debt and how a greater measure of fiscal responsibility might be achieved. The European Union seeks to limit its member nations to deficits that do not exceed 3 percent of GDP and to public debts that do not exceed 60 percent. The failure of the EU member nations to conform to those limits is duplicated in the United States. When Greece’s budget deficit received widespread attention for exceeding 10 percent of GDP in 2010, the deficit of the American federal government was even larger. Most EU nations have public debt in excess of 60 percent of GDP, with Greece leading the pack at over 140 percent and Italy not far behind at nearly 120 percent. If it were a member of the EU, the USA would stand third with public debt at about 100 percent of GDP. Simply to state a desire to control deficits and debt does nothing to secure such control. This simple fact is on display both in the EU and the USA. In 1978, for instance, the US Congress enacted a public law known as Byrd–Grassley (named after its two sponsors), which prohibited budget deficits after 1981 (Primo 2007: 109). It is easy to talk about fiscal responsibility but seemingly difficult to do anything about it. Modern democracies are large in scope, and any listing of their activities would show involvement that spans the...