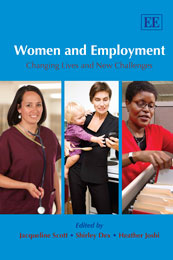 3. Ethnic diﬀerences in women’s labour market activity Angela Dale, Joanne Lindley, Shirley Dex and Anthony Raﬀerty INTRODUCTION This chapter provides an overview of ethnic diﬀerences among women in the labour market. Much research on ethnic diﬀerences in employment has shown not just the extent of inequalities but also the variation between ethnic groups (Berthoud 2000; Blackaby et al. 2002). Research on women’s employment has demonstrated greater diﬀerentials between ethnic groups than for men, with economic activity highest for Black Caribbean women and lowest for Pakistani and Bangladeshi women in the 1990s and early 2000s. Unemployment was higher for all minority ethnic groups than for white women over this period – except for Chinese women who have rates very similar to white women (Lindley et al. 2004). However, there has been little systematic analysis of employment diﬀerences in relation to key life stages – despite the fact that, for white women, there are very large life-stage diﬀerences. Extensive work on (white) women’s employment has shown that it is strongly inﬂuenced by both life stage and cohort – and both are mediated by level of qualiﬁcations (Dex and Joshi 1996; Dex et al. 1998; Elliott et al. 2001; Macran et al. 1996). Theories that explain women’s labour market behaviour have been developed around norms and assumptions that apply to white women. So, for example, much research on women’s employment is concerned with the eﬀects of domestic responsibilities and childcare on the employment of mothers....