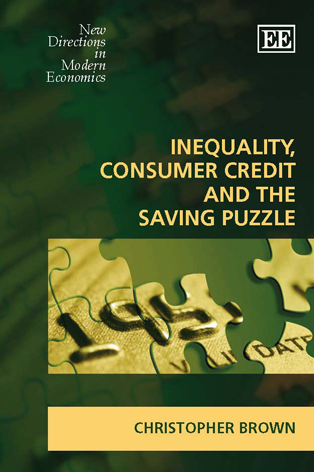 Providing much needed context for current events like the sub-prime mortgage crisis, this timely book presents a vision of an economy evolved to greater dependence on consumer credit and analyzes the trade-offs and risks associated with it. While synthesizing the Keynesian theory of consumption with the Institutional theory of habit selection (brought up to date with new knowledge from evolutionary biology and neuroscience), this book represents an in-depth treatment of the macroeconomic dimensions of consumer credit and implications of recent financial innovations from a non-traditional economic approach.

The collapse of the personal saving rate in the USA after 1993 makes it easy to forget that the long-run stability (or constancy of the trend value) of the saving-to-income ratio (or average propensity to save, in Keynesian terminology) was at one time an established (and stylized) empirical fact of macroeconomic analysis. Indeed, seminal postwar contributions to the theory of aggregate saving (and consumption) sought to reconcile the (apparent) contradiction between the short-run (or cyclical) and long-run behavior of the propensity to save.1 According to standard Keynesian theory, the consumption-to-income (S/Y) ratio should behave procyclically – that is, it should fall over the course of a business cycle contraction because people display a tendency, as a rule and on average, to resist drastic retrenchment in their lifestyles when their incomes are falling. Another logical implication of Keynes’s fundamental law of consumption is that the S/Y ratio should climb in sympathy with a broad-based economic expansion. Time series analysis of the S/Y ratio performed in the 1950s and 1960s revealed that, while the propensity to save did exhibit a pro-cyclical pattern during recessionary phases, there was otherwise a tendency of the S/Y ratio to converge to its long-run or trend value (approximately 0.078 for the 1947–69 era).2 For example, the propensity to save remained remarkably stable through the protracted boom of the 1960s, an empirical fact at variance with the naïve Keynesian view. The relative constancy of the propensity to save amidst very large increases in real incomes is...