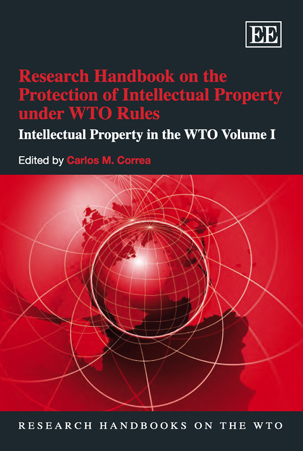 Research Handbook on the Protection of Intellectual Property under WTO Rules

Intellectual Property in the WTO Volume I

This comprehensive Handbook provides an in-depth analysis of the origin and main substantive provisions of the TRIPS Agreement, the most influential international treaty on intellectual property currently in force.

Chapter 14: Unresolved Issues on Geographical Indications in the WTO

Kasturi Das 1. The backdrop The protection of Geographical Indications (GIs) has, over the years, emerged as one of the most contentious intellectual property rights (IPRs) issues in the realm of the Agreement on Trade-related Aspects of Intellectual Property Rights (TRIPS) of the World Trade Organization (WTO). Interestingly, while the Uruguay Round (1986–94) negotiations were witness to a major North–South division regarding the inclusion of IPRs on the agenda, GIs was the only issue on which there was a significant North–North divide all through the Uruguay Round negotiations. In fact, the torch-bearers of the IPRs agenda in the Round, namely, the United States and the European Communities (EC),1 were at loggerheads on this particular issue. While the EC was aggressively pushing for foolproof protection for GIs, particularly for those pertaining to wines and spirits, the United States was strictly opposed to even recognizing GIs as a separate category of IPRs, arguing instead for its inclusion only as a part of the trademarks field. Divisions also existed among other developed countries and among developing countries, exacerbating the difficulties of the negotiations further. The eventual framework of the TRIPS provisions on GIs reflected a very sensitive compromise reached during the Uruguay Round in which a higher level of protection was granted for wines and spirits2 compared to all other categories of GIs, ostensibly for the political reason of persuading the EC to join the consensus on the Uruguay Round package, despite strong opposition on the part of many...