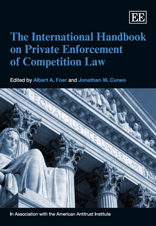 The International Handbook on Private Enforcement of Competition Law

Edited by Albert A. Foer and Jonathan W. Cuneo

With the international community on the brink of an explosion of private remedies for violation of national competition laws, this timely Handbook provides state-of-the-art analysis of the private enforcement of competition laws across the globe. Private enforcement of antitrust is becoming a significant component of competition policy laws worldwide; today, more than a hundred jurisdictions have adopted market regimes operating within a framework of competition law, providing a varied base for developing ways by which persons injured by anticompetitive conduct will (or will not) be able to obtain remedies.

Hwang Lee1 and Byung Geon Lee2 Introduction During the last few years, there has been a gradual increase in Korea of private damages actions in conjunction with the intensifying Korea Fair Trade Commission (KFTC) public enforcement of the Monopoly Regulation and Fair Trade Act (MRFTA). This has been particularly so in the areas of cartel and abuse of dominance cases.3 A Korean newspaper recently reported that, as of the end of 2008, approximately 12-16 cases were pending at the Seoul Central District Court, most of which were follow-on actions from KFTC proceedings. 4 More recent private damages actions of significance include those on military-use gasoline bid rigging (2001), school uniform price fixing (2002), local phone call price fixing (2005), flour and sugar price fixing (2006), and Microsoft’s tying case (2008). 5 The military-use gasoline case was particularly striking because of the large damages award, approximately KRW 81 billion, declared by the district court in 2007. The Ministry of National Defense brought this suit following the KFTC’s imposition of a KRW 190 billion surcharge on five cartel members in 2000, which was the largest fine at that time. The school uniform case is also noteworthy because of the large number of opt-in plaintiffs under the representative action system. In that case, 3,525 parents who had bought school uniforms participated in the litigation with the help of several consumers’ groups. During the course of litigation, as shown below, significant limitations of the opt-in mechanism became obvious and the case had important...